What does a Low Carb Healthy Fat eating plan look like and how does it work?

A really nice paper was just published by Paoli, Rubini, Volek and Grimaldi in the European Journal of Clinical Nutrition titled “Beyond weight loss: a review of the therapeutic uses of very-low-carbohydrate (ketogenic) diets”

You won’t see a better review paper for summarizing the latest in how we think carbohydrate restriction affects various aspects of metabolic health; from weight loss to neurological issues to acne (yes acne!).

A second excellent review article was also published in Nutrition Today by Volek (again!) and Phinney, the low carb gurus. This one is called “A New Look at Carbohydrate-Restricted Diets: Separating Fact From Fiction”. Again this is an excellent scientific review paper.

What I should be doing in this blog is simply drawing your attention to this good work and you can go and check it out for yourself.

Except I’m aware that unless you work at a university, that’s easier said than done. You’d have to buy the papers, which means that most of the people who stand to benefit from the knowledge won’t.

Actually, copyright publishing is a scam of the highest order. What happens is that guys like Volek and Phinney put in heaps of work, often that work is paid for by either public institutions, or by research grants gained through public funds. They then (usually) slave away in the degrading process of blinded peer review, often having to respond to inane comments and endless rebuttals. When they are done, they then sign all of their IP over to a journal, which keeps it all for no cost (and all profit) in perpetuity. Can you imagine anywhere else in the business world that would happen besides academia? It’s laughable, but it is actually what happens to us academics everyday and frankly, we no longer find it funny.

Anyway, I digress. What I really want to do here is summarize the two reviews.

Let’s start with the Nutrition Today paper by Volek and Phinney, which is a nice synthesis of the available evidence for the biology of human energy regulation and homeostasis, and how a carbohydrate restricted diet operates. The main points here are:

Breakfast (scrambled eggs with sides of spinach and sausage)

Lunch (broiled salmon and a side salad)

Now on to the second paper in the European Journal of Clinical Nutrition titled “Beyond weight loss: a review of the therapeutic uses of very-low-carbohydrate (ketogenic) diets”. This is a comprehensive scientific review of the evidence and emerging evidence for the treatment and prevention of a range of chronic diseases with carbohydrate restricted (ketogenic) diets. I have adapted one of their figures into two new ones, showing the state of scientific evidence (strong and emerging separately) for “therapeutic uses of the ketogenic diet”. Hopefully these figures are self-explanatory.

I draw your attention to the “suggested mechanisms” under each one. I’m not going to go into these in detail but it is worth looking at these two figures and noting a few things: 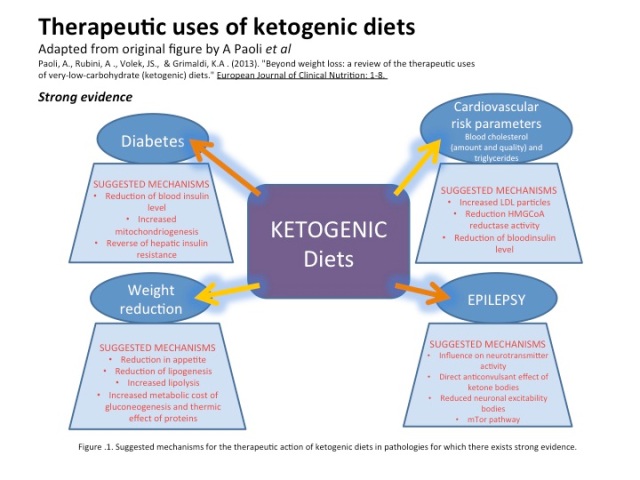 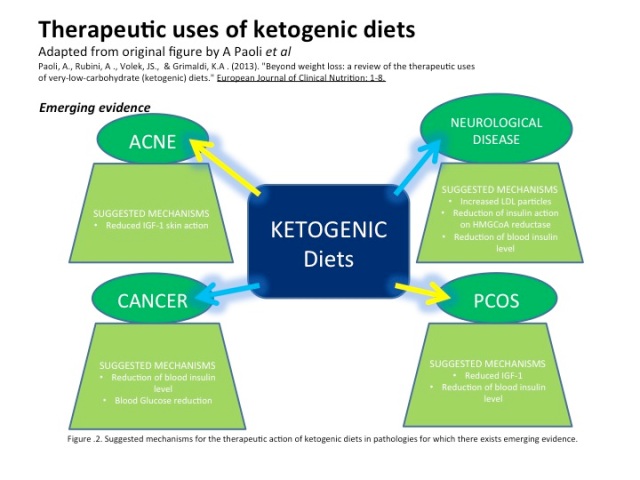 There is now strong evidence to show that low carbohydrate diets are safe and effective treatments for several conditions, and have some likely positive effects for other conditions.

So that’s it. Two great papers. Hopefully I have captured the essence of what they are saying and where the evidence is at. This is important to get out there into the public and health community. While it’s all behind the paywalls of journals it won’t. So hopefully this helps.

7 Things You Should Know Before Taking A Statin

7 Things You Should Know Before Taking A Statin

Fresh from the blog

About What The Fat

“Prof Grant, Dietitian Caryn and Chef Craig are the leaders in the food revolution in New Zealand and Australia. I congratulate them on a job well done bringing the recipes, the practice, and the science together in one book. This is the complete how to guide for low-carbohydrate, healthy-fat living”.

Join our mailing list to receive the latest news, sneak previews and special offers from What The Fat?

You will recieve The Skinny and The Fast as a sign up bonus - two practical guides to eating the Low Carb Healthy Fat (LCHF) way.

You have Successfully Subscribed!